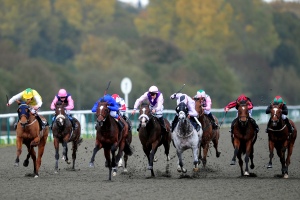 Frankie Dettori made a perfect comeback from injury when he won on both of his first two rides at Lingfield
Pic: Courtesy ARC/Lingfield Park

Frankie Dettori made a perfect return to the saddle when he won on both of his first two rides at Lingfield Park today after a three and a half month injury enforced absence.

The Newmarket-based Italian had been sidelined since breaking an ankle in a pre-race fall in October that forced him to miss the winning ride on Treve in the Prix de l’Arc de Triomphe.

Yet the 43-year-old made a remarkable comeback when he landed the opening race on the John Hills-trained Eco Warrior and followed up an hour later when winning on the Jeremy Noseda-trained Gone With The Wind.

In the first race the three time champion jockey quickly took control on Eco Warrior and maintained the advantage throughout the 12 furlong auction maiden to prevail by a neck.

He prevailed by the same margin in the six furlong maiden race at 2pm on Gone With The Wind.
“I’m really pleased,” Dettori said after unsaddling Eco Warrior. “To be honest I really used Lingfield today to get me back to 100 percent and as you can see I am still blowing a lot. It has been a fairytale comeback and it is great to be back.”

The Derby winning jockey’s third mount of the day was on Exemplary who finished well back in the feature race of the day which is a qualifier for the All-Weather Championship finals.

Dettori, who last year teamed up with Sheikh Joaan Al Thani – the owner of Arc winner Treve, last week revealed that he will be based in Britain throughout the winter, while also riding occasionally in Dubai and Qatar.