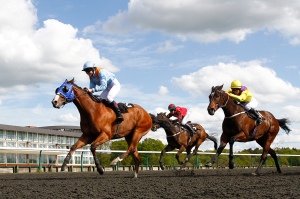 Newmarket trainer George Margarson is confident that Rebellious Guest can continue his good form in the £100,000 coral.co.uk Winter Derby at Lingfield (3.50pm) on Saturday.

The Group 3 contest has attracted a maximum field of 14 runners that includes last year’s winner Farraaj and 2011 victor Premio Loco for the 10 furlong contest that now also doubles as a fast-track qualifier for the all-weather championships.

Rebellious Guest has been in great form of late, winning three of his last four starts. The five-year-old won twice in eight days at Lingfield but failed to secure the hat-trick when finishing an unlucky fourth at the same track.

The son of 2000 Guineas winner Cockney Rebel made amends at his next start when easily landing a Class 2 over 10 furlongs at Kempton on March 5 and Margason anticipates a big run tomorrow.

“Rebellious Guest worked well over seven furlongs on the Al Bahathri yesterday and he seems so well that we thought we would let him take his chance,” Margarson said.

“He has got a bit to find with some of the others, but he is rated 100 now and should be three from three around Lingfield. I always thought he was more of a miler, but we thought it was worth a gamble stepping up trip and he got the 10 furlongs well.

“The pace should be good on Saturday and, like everything else, we will need that bit of luck in running. If he gets that, I can see him finishing in the first three.

“He’s had a lot of problems, but one of the keys to him has been the lad who rides him out, Jamie Mackay. They get on really and when you have horse with the talent he has, you have got to keep them happy.

“He has also had problems with his back and has a very similar profile to Young Mick. We have just had to wait for the horse to become confident enough to let himself down and I think the run at Southwell when he was third [which preceded the first Lingfield victory] really helped him.

“Jamie Spencer rode him to win at Lingfield next time and felt he was a Group horse – he said ‘How did you get that running off 80!’ He has always been a good horse at home, but it has taken him time to settle down and get his confidence back.”

Read Horse Talk with Simon Jackson each day at London24 for the latest horse racing news.