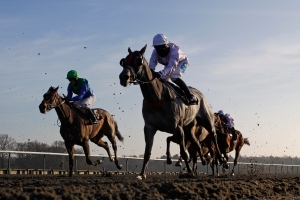 Robin Hoods Bay has improved since winning the coral.co.uk Winter Derby and is primed for the £200,000 Coral Easter Classic at the All-Weather Championship Finals next week.

The six-year-old all-weather specialist has been in superb form of late, winning two of his last three starts and finishing a luckless fourth in the other and is now best priced at 9-2 (BetVictor) for his intended target at Lingfield on Good Friday.

“I am very pleased with him,” Vaughan said at a conference ahead of the All-Weather Championship finals on April 18. “He is the type of horse I don’t do a whole lot of work with at home. He had a breeze over three furlongs this morning and might do a bit over six furlongs on Saturday. He is a fit horse.

“I have always felt that Robin Hoods Bay is better on the all-weather and it is great that a horse like him has the opportunity to race for really good money.

“He is a horse who has come a long way. He was mentally fragile early on and he has improved a lot from racing. He appreciates pace in his races and the consistent all-weather surface.

“I think he is getting better. The Winter Derby was the plan and that came off. Good Friday will be a bonus. Luke Morris will ride again. Robin Hoods Bay is running against the same horses he met in the Winter Derby and, if he is in the same form, he should be thereabouts.”

The £200,000 Coral Easter Classic is one of seven races on Finals Day, which offers total prizemoney of £1million and concludes the inaugural all-weather series, which commenced in October.

“In terms of taking the championships forward, ARC, the Jockey Club and our sponsors  will have a debrief at the end of this year’s championships looking ahead to next year,” Allen said at Lingfield yesterday.

“We will also be having discussions with Meydan, the Breeders’ Cup and the Irish and French racing authorities to see how we develop the All-Weather Championships going forward.

“The All-Weather Championships is certainly something that we want to see develop into a big European, internationally-interested event.”