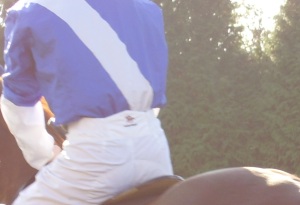 By Simon Jackson at Epsom Downs.

Our Channel looks set to take his place in the Investec Derby after narrowly prevailing in the Class 2 Derby Trial at Epsom Downs’ first race meeting of the season on Wednesday.

The William Haggas-trained son of English Channel led throughout the 10 furlong journey and fought well in the closing stages for Ryan Moore to score by a head.

Victory in the £50,000 contest secured a place in the Derby on June 7 and Maureen Haggas, wife of the winning trainer, believes that the Abdulla Al Mansoori-owned colt is now likely to run in the Derby.

“I would think the owner would love to go [for The Derby]. So I would think that would be the plan,” Maureen Haggas said of the colt who is best priced at 66-1 for the big race.

“The owner was completely instrumental in running today. He was eager to come here and he was the one that made us come here really, so I would think he would love to have a runner in The Derby. And while I’m not sure he’ll stay, there is only one Derby isn’t there?

“The horse has done great. He is a very honest, nice little horse. He has improved a bit from last year. I wasn’t sure he would get this trip and I think he did just. Maybe on slightly better ground he will get a little bit further, but it is very hard to say.

“Ryan gave him a lovely ride and had him relaxed and very switched off in front and we are very happy.

“I don’t think he will have a run [before the Derby]. If the owner definitely wants to come back, we will probably just come straight back here and then make a plan after that. I would think that would be the thing to do. But it is up to William really and Mr Al Mansoori so we’ll see.”

The other joint-feature race of the day was the £50,000 Investec Property Investments City and Suburban Stakes, which was also over 10 furlongs and was won by the Mark Johnson-trained Sennockian Star.

“He won five times last year and has won on all sorts of ground,” assistant trainer Deirdre Johnson said. “He seems to go on anything. We will make a plan after we see what the handicapper does.”