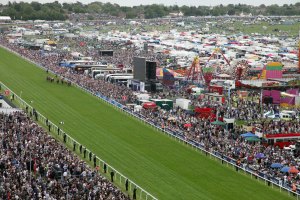 Australia is as short as 5-4 for the Investec Derby at Epsom Downs on June 7. Pic: Courtesy Epsom Downs.

Australia is now as short as 5-4 (Boylesports) for the Investec Derby on June 7 after finishing a close third to Night of Thunder in the QIPCO 2000 Guineas at Newmarket on Saturday.

The Aidan O’Brien-trained colt was unbeaten in three starts in Ireland ahead of the first Classic of the season and connections anticipate the mile and a half distance of the Derby will suit him well.

The beautifully bred son of Derby winner Galileo and Oaks winner Ouija Board was switched to the stands side by Joseph O’Brien as the field split into two groups on the Rowley Mile.

He continued to race close to the leaders and fought well in the closing stages to finish half a length and a head adrift of the winner and second placed Kingman, an effort that delighted connections.

“Australia has run a great race and I could not be happier with his first run. I am now looking forward to the rest of the season,” Joseph O’Brien said.

“Being by a Derby winner out of an Oaks winner you would hope a mile-and-a-quarter and a mile-and-half would be his game. He has run an unbelievable race.

Trainer Aidan O’Brien was also thrilled with the run and reiterated that the Derby is the colt’s immediate target.

“He was a bit unlucky the way they split in the Guineas,” he said. Joseph said he had to commit early, but he ran as straight as a gun barrel and I’m very happy with the way he’s come out of the race. He’s in good form and won’t run before the Derby.”