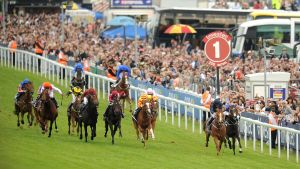 Ruler of the World and jockey Ryan Moore lead the field on the way to winning the 2013 Investec Derby at Epsom Downs. Pic: (PA) Andrew Matthews (Courtesy  of Epsom Downs).

Betfred are offering ‘non-runner, no bet’ from 9am this morning (Monday) on any bets placed on horses in the Investec Derby at Epsom Downs on Saturday.

The bookmaker is the first of the major firms to confirm that they will refund stakes on non-runners in the colts’ Classic, where the betting continues to be headed by the Aidan-O’Brien trained Australia at 11-10.

Australia’s stablemate, Geoffrey Chaucer, is considered by Betfred to be the main danger and is priced at 6-1, ahead of 10-1 shots Western Hymn and Racing Post Trophy Winner Kingston Hill who worked well at Epsom last week.

“Kingston Hill went really nicely,” jockey Andrea Atzeni said after completing the workout with two stable companions on Thursday. “He travelled good, quickened up well and liked the ground. It’s pretty soft out there but he’s won on that ground before.

“I was very pleased with him. We didn’t go mad today but he stretched out well in the last furlong and quickened up well. It’s just great to be able to ride a horse who has a chance of running a big race.”

The son of Mastercraftsman was eighth, beaten five lengths, in the QIPCO 2000 Guineas last month and connections opted to go straight to Epsom, rather than contest any of the other Derby trials.

“There had been a lot of excitement and build-up to the Guineas so the first reaction was slight disappointment after the race,” trainer Roger Varian admitted. “But after getting feedback from Andrea and watching the tape on the evening afterwards a few times it was probably quite a good run.

“He fluffed his lines at the start and giving those speedier horses a head start was the one thing you couldn’t do. He was always playing catch up and Andrea could never get into the race but Kingston Hill was staying on at the end and only four or five lengths from the winner.

“With the field splitting we lost ground coming across as well. The bare facts point to him having run a very good Derby trial and he has come out of the race well.

“We thought about running in the Dante but decided to stick to Plan A, which was using the Guineas as a Derby trial and then coming to Epsom. It would have been only 12 days after the Guineas to run at York.”