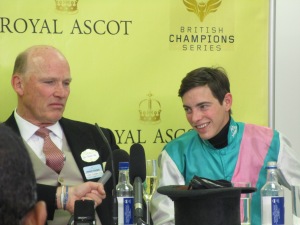 John Gosden and James Doyle speak to the racing press after Kingman’s victory in the St James’s Palace Stakes on the first day of Royal Ascot.

By Simon Jackson at Royal Ascot.

Kingman secured the bragging rights over Night Of Thunder when he finished fast for James Doyle to land the St James’s Palace Stakes on the first day of Royal Ascot.

The result reversed the placings of the QIPCO 2000 Guineas at Newmarket last month when the Richard Hannon-trained Night Of Thunder landed the first Classic of the season, finishing half a length in front of Kingman.

Kingman followed up with an impressive victory in the Irish Guineas and proved it was no fluke on the first day of Royal Ascot as he reeled in Night Of Thunder and Richard Hughes who had attempted lead all the way.

“I was really impressed with Richard Hannon’s tactics which completely fooled us all,” trainer John Gosden admitted. “They held [Night Of Thunder’s stablemate] Toormore back and sent on Night Of Thunder, who stays really well.

“That was really clever, but I’m pleased James didn’t think, ‘Oh, I’m in trouble now’ when Richard Hughes slowed it down approaching the home straight.

“James was on a horse with a superior turn of foot and he kept his cool.

“It was the plan to wait to until the last furlong. He did and the horse showed his class, which is always exciting to watch. It was an electrifying turn of foot.

“Our horse has won in the way I wanted him to do it, and the jockey has shown his skill.

“A lot of people would have panicked at the head of the straight, seeing their main rival slowing it down, then kicking on and building a good lead, but he waited, which was great.”

Gosden indicated that he will now give Kingman a break and that he has no plans to step the son of Invincible Spirit up in trip from the one mile distance of today’s contest.

“The horse, if you wanted to, could be stepped up in trip – but I don’t see the point,” Gosden said. The Sussex Stakes is a strong possibility, but he will have a break first.”

Doyle added: “Despite losing in the Guineas I always took the opinion he was a better horse.

“He has a potent turn of foot and I enjoyed it so much. You push a button and he is away, it was just brilliant. I could afford to be patient with his turn of foot and today he showed what sort of horse he is.”

“I was very confident coming in to today. I put the QIPCO 2000 Guineas well behind me and I didn’t think Night of Thunder could beat us, no matter how they looked at it.

“The Guineas was annoying. He didn’t get beat very far, and it tarnished his record. Everyone thought he wasn’t a champion after that race but he has put that well behind him now and we look forward to the future.”

“All the top mile races are open to him and with that turn of foot he could even drop down in trip, I doubt we will but it just shows the class and the horse he is.”