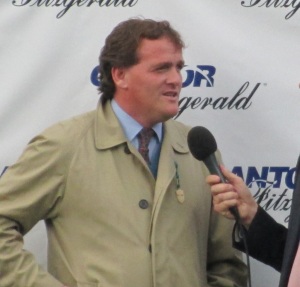 Richard Hannon has confirmed that Night Of Thunder will step up to 10 furlongs for the first time to contest the Group 1 Coral-Eclipse Stakes at Sandown on Saturday.

The son of Dubawi has won three of his five starts in races up to a mile that includes victory in the QIPCO 2000 Guineas where he finished half a length in front of Kingman. Australia, who went on to land the English and Irish Derbies, finished a further head back in third place.

Kingman turned the tables on Night Of Thunder when beating his rival into second place over a mile in the St James’s Palace Stakes at Royal Ascot.

Hannon believes the extra distance will suit his charge who is currently priced at 3-1 for Saturday’s race, where the betting is headed by Prince Of Wales’s Stakes winner, The Fugue, at 7-4.

“The form of the Guineas could hardly have worked out better, and Night Of Thunder showed that it was no fluke when running so well against Kingman at Ascot,” Richard Hannon said on his website.

“He is a very uncomplicated colt in that you can ride him from the front or drop him in, and, while The Fugue would not want any rain this week, our fellow is oblivious to ground conditions.

“We know it will be another tough one, but we are happy with Night of Thunder and looking forward to Saturday.

“Night of Thunder ran all the way to the line at Ascot and I walked off the stand convinced that it would be worth trying him over further, and when Hughesie [jockey Richard Hughes] got off he was of the same opinion so we are giving it a go.

“Obviously Mr Gosden is standing in our way again, this time with The Fugue, who was hugely impressive when winning the Prince of Wales’s Stakes in record time.

“But Night of Thunder has bounced back well and has pleased us in the little exercise he has done since Ascot.

“We all feel that he has a good chance of staying the trip, and, though he is a first foal, the dam is by Galileo, so there is every prospect on pedigree that he will get further than the mile.”