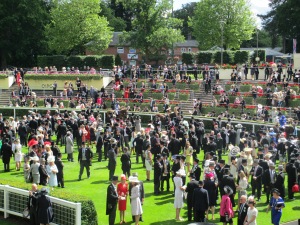 Telescope returns to Ascot for the King George VI and Queen Elizabeth Stakes.

Sir Michael Stoute has said that suitable ground is the key for King George VI and Queen Elizabeth Stakes favourite Telescope, who tackles Group 1 company for the first time at Ascot on Saturday.

The son of Galileo was prominent in the betting for the 2013 Investec Derby but missed the race after a series of setbacks. He returned to the racetrack last July and won two of his three starts that included the Group 2 Great Voltigeur Stakes.

Yet a brace of defeats on soft ground at Sandown and Chester raised questions. But Stoute reckons the answer is simply that his charge – who has not finished out of the first two in his eight starts – just needs suitable ground.

“I think the two previous races he has had this year were run on unsuitable ground, so I am thrilled to see him do that today,” Stoute said immediately after Telescope stormed to an emphatic seven length victory in the Group 2 Hardwicke Stakes on the last day of Royal Ascot this year.

“I was convinced after [finishing second at] Chester that heavy ground does not suit him. Noble Mission, the winner, loves that ground and has improved. So I felt it was a massive task to try and beat him at Chester. Our fellow’s action wasn’t as good as it can be and he was labouring in that ground.

“Telescope has never run a bad race, though he had been a little bit disappointing so far this year, but only because he has been on the wrong ground. He just had to go and do it today so it is a relief. It is great to see him win like that as we have always held him in high regard.”

Harry Herbert, racing manager to Telescope’s owners, Highclere, is looking forward to seeing the colt take on a maximum of eight rivals for the 12 furlong contest where he heads the betting at 15-8.

“Given the size and pedigree of him, there was every chance he would be reaching his peak about now. It is what Sir Michael excels at and Telescope ticks a lot of those boxes,” Herbert said to the Sporting Life.

“Last year it got everyone rattled and annoyed. He became a talking horse.

“He couldn’t line up for the Derby and I realise how frustrating it was for everyone, especially ante-post punters, but he had a legitimate excuse with an infection in his pastern which stopped him running in the Dante and then he did a lacklustre bit of work at Lingfield.

“The Hardwicke was the first time since the Voltigeur that we’ve seen him on decent ground and could use that stride that we know he’s got.

“He’s got a phenomenal action. The ground was bad at Sandown and Chester and that just stops the flow of the horse. Take nothing away from Noble Mission, he’s proved beyond a shadow of doubt that he’s a proper Group 1 horse and a tough nut to crack, especially in soft ground over a mile and a quarter.”

The ground at Ascot is currently good to soft. Saturday’s forecast is for predominantly dry and sunny weather.