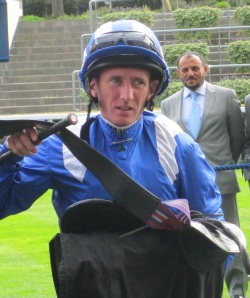 In-form jockey Paul Hanagan was aboard White Nile who slipped and fell on Day One of Glorious Goodwood.

Paul Hanagan has suffered a hairline fracture to his lower left arm after his mount White Nile slipped and fell in the bet365 Summer Handicap at Goodwood.

The dual champion jockey was treated at the racecourse and stood down for the rest of the day after the initial x-ray proved to be inconclusive.

A second x-ray at Newmarket later that day revealed the fracture.

“Paul was stood down for the day. He has not been sent by the racecourse to hospital, but he will have to pass a medical to ride tomorrow,” the British Horseracing Authority’s communications manager, Robin Mounsey, said immediately after the accident. “He was x-rayed here. The jockey reported that the horse slipped.”

The mishap happened during an otherwise superb summer for Hanagan, who took over as retained rider for Sheikh Hamdan Al Maktoum in 2012.

In June he landed the Investec Oaks on Taghrooda. He followed up with victory in the Coral-Eclipse Stakes on Mukhadram in early July, before teaming up with Taghrooda again to land the George VI and Queen Elizabeth Stakes.

“It’s an amazing feeling to win this race and I’ve got to thank Sheikh Hamdan for giving me the opportunity to ride her,” Hanagan said after Taghrooda’s three length victory at Ascot on Saturday.

“I was probably further back than I liked to have been in the early part of the race as they went so quick but she can only go as quick as she can, so I had to be patient.

“I was quite confident when we got alongside Ryan [Moore, on runner-up Telescope] as I know she stays well and she’s galloped all the way to the line.

“It’s brilliant for myself and also my family. I’ve got to thank the whole team as, without them, she wouldn’t even get here. This season has been amazing and that just capped it all off. It was such a buzz and something that you never think would happen. The reception she is getting is just out of this world.

“I have to make a very tough decision and [third-placed] Mukhadram ran very well. I am so proud of him. I am so delighted for the whole team, it’s brilliant, a great job.

“It feels like she has hardly had a race, she is so laidback and it’s so important to have a temperament like that.”

The victory propelled the John Gosden-trained filly to the forefront of the betting for the Prix de l’Arc  de Triomphe on October. Her next start is likely to be the Yorkshire Oaks on August 21 and Hanagan’s agent, Richard Hale, says that Hanagan hopes to have returned by then.

“Paul has a hairline fracture of his lower arm,” Hales said. “It is in a cast. It is not an area of movement so hopefully he will not be out too long and be back in time for York.”