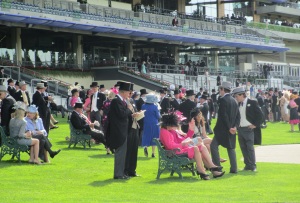 Racegoers study the form at Ascot.

Prize money of £3.75million is up for grabs at QIPCO British Champions Day at Ascot where connections of Cirrus Des Aigles are out to defend his superb record in the Champion Stakes.

The French raider has finished in the first two in each of the past three runnings of the 10 furlong contest that this year is worth £1.3million. The eight-year-old won the inaugural Champion Stakes at Ascot in 2011, before finishing second to Frankel in 2012 and Farhh in 2013.

The winner of over £5.8million was last seen when landing the Investec Coronation Cup on Derby day and has recovered from an injury he suffered during the race.

“Cirrus Des Aigles is fine, he has recovered well from the injury that he sustained at Epsom on Derby Day, demonstrating his usual courage,” trainer Corine Barande-Barbe said.

“He has come back into training and we are just starting to work him again, although we are doing everything very slowly and taking our time with him.

“I would like to get him back for the Prix Dollar at Longchamp on the day before the Arc and if everything goes well there it would be great to run him in the Champion Stakes for a fourth time.”

The Champion Stakes on October 18 has attracted 37 entries that include Investec Derby winners Australia and Ruler Of The World, along with the unbeaten Oaks and King George VI and Queen Elizabeth Stakes winner Taghrooda.

They are amongst a superb set of entries for Champions Day that includes 18 European classic winners. The high quality of the entries for Britain’s richest ever raceday has delighted Rod Street, the chief executive of the British Champions Series.

“The hugely exciting entries for all the races promise to make QIPCO British Champions Day an occasion to savour,” Street said.

“With record prize money on Britain’s richest raceday, five outstanding Group races and the promise also of the inaugural Balmoral Handicap, the richest mile handicap in Europe, QIPCO British Champions Day will live up to all its expectations.”

“Tickets have so far sold much faster than last year so we would urge racegoers to book early.”

Tickets can be purchased at www.britishchampionsseries.com  Prices start from £30 per person with children under 18 admitted free. The first 2,000 students will also be admitted free when ordering using the code STUDENTSBCD.