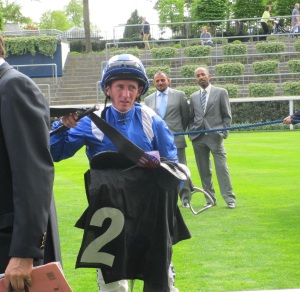 Paul Hanagan hopes to be back for the Ebor meeting at York.

Paul Hanagan’s hopes of returning to race-riding at the Ebor meeting at York next week have been boosted following news that he rode out at Newmarket on Friday morning.

The jockey suffered a hairline fracture to his lower left arm after his mount White Nile slipped and fell in the bet365 Summer Handicap at Goodwood on July 29.

The dual champion jockey was treated at the racecourse and stood down for the rest of the day after the initial x-ray proved to be inconclusive. A second x-ray at Newmarket revealed the fracture.

The mishap happened during an otherwise superb summer for Hanagan, who took over as retained rider for Sheikh Hamdan Al Maktoum in 2012.

In June he landed the Investec Oaks on Taghrooda. He followed up with victory in the Coral-Eclipse Stakes on Mukhadram in early July, before teaming up with Taghrooda again to land the George VI and Queen Elizabeth Stakes.

The King George victory propelled Taghrooda to the forefront of the betting for the Prix de l’Arc  de Triomphe on October. Her next start is likely to be the Yorkshire Oaks on August 21 where Hanagan hopes to be fit to ride.