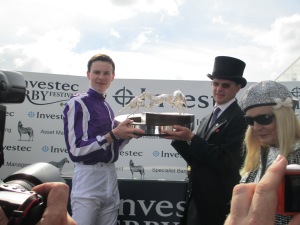 Joseph O’Brien and his father, trainer Aidan O’Brien lift the trophy after winning the 2014 Investec Derby with Australia.

This year’s Epsom hero Australia has been ruled out of the Champion Stakes at Ascot next week after developing a problem with a hoof and has been retired.

Australia retires having justified connections’ sky-high opinion of his ability with an impressive victory in the Investec Derby.

The son of Derby winner Galileo and Oaks heroine Ouija Board followed up with wins in the Dubai Duty Free Irish Derby and Juddmonte International Stakes before suffering a shock defeat in the QIPCO Irish Champion Stakes when second to The Grey Gatsby.

“He developed a problem in a right hind hoof,” owners Coolmore’s spokesman Kevin Buckley said today (Saturday). “The decision was made yesterday to retire him.

“We were all looking forward to it [going to Ascot], but, as you can appreciate, any type of setback like that jeopardises the training regime.

“Hence we had to take that decision he wouldn’t be ready for the Champion Stakes,” Buckley told Channel 4.

Australia won five of his eight starts for prize money of a touch over £2million. He was ridden throughout his career by Joseph O’Brien, the son of trainer Aidan O’Brien who held a high opinion of the superbly-bred colt from the outset.

“When the lads [owners] brought this horse from the sales we thought he was very good and he had the pedigree to go with it,” he said. “He’s a very special horse with class and speed.”

In other news Paddy Power has priced Treve at 5-1 to win a third Prix de l’Arc de Triomphe after news that the dual Arc winner will not be retired after all.

Paddy Power said: “After the season that Treve had, we didn’t think she’d prevail in Paris, but she couldn’t have been more impressive and it will take some machine to stop her completing the three-peat.”