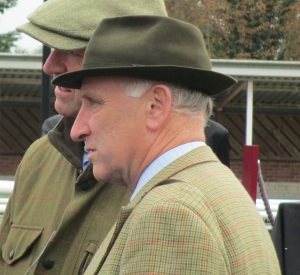 Oliver Sherwood has been eyeing the Hennessy with Many Clouds since last season.

Oliver Sherwood believes that Many Clouds will have no problem with the three miles and two and half furlong trip of the Hennessy Gold Cup at Newbury next week.

Many Clouds shares favouritism at 8-1 with Djakadam and Smad Place for the prestigious Grade 3 Chase on the third of the three-day Hennessy Festival – which runs from November 27 – 29.

Sherwood’s charge highlighted his well-being when landing a Class 1 chase at his first start of the season at Carlisle earlier this month.  The trainer has high hopes for the seven-year-old who continues his partnership with Leighton Aspell, who has won on him six times in 16 starts.

“I’m very happy with him,” Sherwood said. “On his reappearance at Carlisle I thought Eduard would be hard to beat and I was delighted when we won.

“I can’t see the [Hennessy] trip being a problem. There’s plenty of stamina in his pedigree. He was second behind O’Faolains Boy in the [three mile] Reynoldstown Novice’s Chase last season where we were staying on and I can’t see it being a problem.

“In terms of his jumping, he’ll have to be spot on in such a big competitive handicap and he’s had plenty of schooling. I was very pleased with his jumping at Carlisle, so fingers crossed,” the trainer said on the Newbury website.

Meanwhile co-favourite Smad Place is set to be joined in the Hennessy by stablemate Midnight Prayer (20-1). The pair both worked at Newbury on Tuesday and trainer Alan King is pleased with their progress.

“I’m very happy with both horses,” King said. “It’s good to get them out and have a change of scenery – they haven’t seen a racecourse since Cheltenham in March.

“It wasn’t serious work, but they both enjoyed it. It gets the nerves and the adrenaline up, they can experience the atmosphere of a racecourse when they come off the back of the horse box. They just cantered quickly down the back, breezed along – neither had a hard blow, they just did enough.

“I always thought Midnight Prayer was a decent staying chaser. I’m not worried about coming back just for the Hennessy – there are not many options for him.

“Off a mark of 155 Smad Place should go well. Wayne [Hutchinson] will probably ride.

“He’s strengthened up now and there’s more improvement to come. Hopefully, he might be a Gold Cup horse and if he is to be he should run a massive race off this mark.”