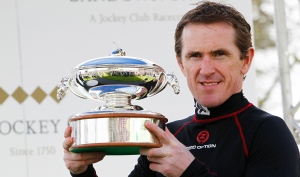 Tony McCoy made a perfect return when he scored on Southfield Royale in the opening race at Fontwell Park on his sole ride of the day.

The 19-time champion jockey has not ridden in public since November 5 after opting to take some time away from the saddle to recover from a rib injury sustained in October and aggravated by a fall at Exeter earlier this month.

Today’s victory in the two and a half mile novices’ hurdle was the second in as many starts for the Neil Mulholland-trained four-year-old who won a bumper at Market Rasen for McCoy in June.

Southfield Royale was kept handy throughout and was sent to the front by McCoy three fences from home. The duo maintained a slender lead at the last fence and stayed on well in the run-in to score by two and a half lengths.

The winner was McCoy’s 153rd of the national hunt season that concludes on 25 April and before being sidelined he had hoped to ride a record 300 winners.

But the multiple champion, who holds the record of 289 winners in a season, believes that his chances of riding 300 winners this year have been scuppered by his recent absence.

“It has been a long time but I had to get myself right which was the most important thing. I had a few injuries and I was trying to keep going but they just needed time,” McCoy told ATR.

“I was trying to carry on and was hoping that I would ride 300 winners and couldn’t afford to have any days off. I was a case of the brain making the body do things that it wasn’t able to do. So I took the time off and I am alright now. That’s the main thing.

“It is near impossible [to ride 300 winners now]. I will carry on and keep going and try to stay healthy and ride a few good horses along the way which is more important now.

“You can’t afford to miss any days so it is impossible to ride 300 winners now and you have got to accept the fact. I will just try to ride as many winners as I can and hopefully there will be a few good ones along the way.”