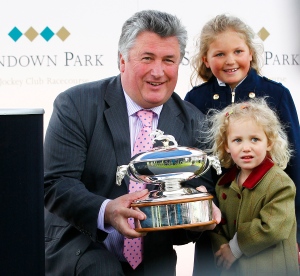 Paul Nicholls has given an upbeat report about the form of Silviniaco Conti and Al Ferof ahead of the William Hill King George VI Chase at Kempton Park on Boxing Day.

Speaking at the launch of the William Hill Winter Festival in Covent Garden on Monday, Nicholls described Silviniaco Conti as appearing to be in the ‘form of his life’ as he bids to secure back to back victories in the King George.

Silviniaco Conti impressed with the manner of his win in the Betfair Chase at Haydock last month where he stayed on well in the closing stages to land the Grade 1 contest for the second time in three years.

The winner has reportedly come out of race well and Nicholls said that he is looking forward to returning to Kempton with the eight-year-old who heads the betting at 11-4 with the sponsors.

“Last year he [Silviniaco Conti] would have a run and it took him a while to get over it but he has bounced straight back out of that race. He worked nicely on Saturday and has kept plenty of condition on and we are very happy with him,” Nicholls said.

“His record says he is very good. He has won two Betfair Chases and a King George. He missed out on the Gold Cup last year, when I don’t think he was quite right, and he does appear to be in the form of his life at the moment.

“If you look at last year’s Betfair Chase [when third behind] Cue Card and Dynaste, and look at this year’s race where they have finished behind him, you could say that he is probably a little bit better this year. We are looking forward to a big day.

“What he would want is plenty of rain as good ground at Kempton wouldn’t be ideal for him to be honest with you. If you had a dry three weeks and the ground was good or faster at Kempton you would be seriously concerned about it. But if it keeps on raining and it is soft, it is ideal for him. Last year’s race being soft and making it a test of stamina did suit him.”

Meanwhile, Al Ferof remains prominent in the betting and is best priced at 8-1 after a hugely impressive victory in the Grade 2 Amlin 1965 Chase, on his first run of the season at Ascot last month.

“Al Ferof was probably at a career-best at Ascot the other day and the form has worked out really well,” Nicholls continued. “For whatever reason he seems to be much, much better in himself this year than he was last year when he had a few problems.

“He hadn’t done a lot of work before [he won] the other day and he can only have improved for that run and that was top-class form.

“The biggest issue with him is whether he will get three miles if it is really, really soft ground.

“He has got to prove that he stays three miles, but at his very best he might well do.”

The going at Kempton is currently good to soft, soft in places and Brian Clifford, the clerk of the course and director of racing, expects the ground to be no firmer than good to soft for their feature race of the year.

“It is good to soft, soft in places now and rain is expected this week,” Clifford said. “The weather is unsettled after that and I can’t see it being any better than good to soft at best.”