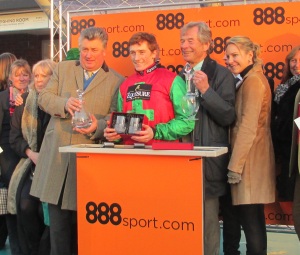 Paul Nicholls and Sam Twiston-Davies team up again with Zarkandar at Ascot on Saturday.

Ascot’s attention turns to national hunt racing as they stage their most valuable jumps card of the season on the second day of the Christmas Meeting which takes place on Friday and Saturday.

Saturday’s valuable card is headlined by the £150,000 Ladbroke Hurdle which is one of three races – alongside the Mappin & Webb Silver Cup Handicap Chase and JLT Long Walk Hurdle – that offers prize money of £100,000 or more.

Zarkandar heads the betting for the Long Walk Hurdle where he will be ridden by Sam Twiston-Davies – and may be good enough to win – according to trainer Paul Nicholls’ former stable jockey Ruby Walsh.

“This looks a match to me between Zarkandar and Medinas,” Walsh said on his Paddy Power blog which was posted on Tuesday.

“Paul Nicholls’ Zarkandar bounced back to form when winning a valuable Grade 1 over three miles at Auteuil while Medinas was impressive in when beating Cole Harden and the reigning World Hurdler More Of That at Newbury,” he continued.

“Reve De Sivola has actually won this for the past two seasons while Aubusson was a good winner at Haydock after a lay-off. But this is a big step up to Grade 1 company.

“Connections look to be taking a shot in the dark with Dell’ Arca and if I had to call it I’d go with Zarkandar to shade it from Medinas.”

Six races are also scheduled at Ascot on Friday that includes the £30,000 Sky Bet Supreme Trial Novices’ Hurdle, one of two Grade 2 races that day.

The two-mile contest is the second of six races in the ‘Road to Cheltenham’ series backed by Sky Bet, culminating with the Grade 1 Sky Bet Supreme Novices’ Hurdle at the Cheltenham Festival.

Trainer Paul Nicholls captured tomorrow’s prize with Irving last year and this time will be represented by Emerging Talent in the boutique field of four runners.

“Although low on numbers we are high on quality,” Sky Bet’s racing PR manager, Michael Shinners, said. “It’s a high class line up and we can be sure that whatever wins will emerge as a serious contender for the Sky Bet Supreme Novices’ Hurdle at Cheltenham in March.”