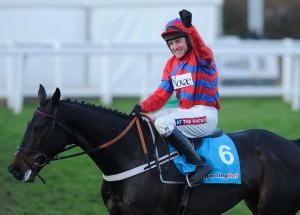 Sprinter Sacre appears set to make his long-awaited comeback in the Sodexo Clarence House Chase at Ascot later this month after impressing in a public workout over the holiday period.

The winner of 14 of his 17 starts, that includes victory in the 2013 Queen Mother Champion Chase, has been side-lined since suffering a heart scare 12 months ago.

Connections have been pleased with his progress since then and he showed his well-being when schooled at Newbury last week by Barry Geraghty who later admitted that he “can’t wait” to ride the nine-year-old on January 17.

“It [the workout] was virtually a year to the day that I pulled him up at Kempton and if anything were to go wrong in this school and gallop it was going to be laid bare in public,” Geraghty said.

“It was a brave move by Nicky Henderson and one that was fully rewarded because I walked off the track absolutely delighted – the Sprinter of old was back.

“We didn’t hang about over the five fences then whipped round to work up the straight – a good, strong gallop but always well within ourselves.

“There might have been a few gasps from the crowd when he was a bit exuberant and left his hind legs behind at the ditch but that just pleased me because he came up a stride early which showed he was back to himself,” Geraghty said on his At The Races blog.

“It was a brilliant indication of how well in himself he was.

“It took me until past the Hennessy start going down the back straight to pull him up and although he gave a nice blow after, it wasn’t excessive.

“That wasn’t surprising because Nicky has had him on the go for a good while.

“All he needs now is another couple of pieces to bring him further forward and then he should be bang on for Ascot in the Clarence House Chase on January 17.

Read ‘Horse Talk with Simon Jackson’ at London24 for the latest horse racing news and follow on Twitter @horsetalk.