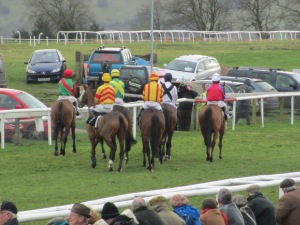 Jockeys prepare for the start of a race at Plumpton.

By Simon Jackson at Plumpton.

Plumpton is the latest racetrack to announce discounted tickets to racegoers in the south east by offering two-for-one entry to their jumps meeting on Monday February 23.

The national hunt racecourse, located a one hour train journey from London Victoria, has announced cut-price admission to the At The Races Raceday at Plumpton in east Sussex where horseracing first took place in 1874.

The ticket offer is for the Grandstand and Paddock enclosures and also includes a free race programme for the seven-race card.

The deal is accessed by using the code ATR241 when booking tickets and closes six days prior to the event at Plumpton, who on Monday hosted a six-race jumps card where trainer Jim Best and jockey Tom Scudamore each bagged a double.

The duo combined to win the opening race, a two mile Class 5 maiden hurdle, with Boru’s Brook who made a winning debut over obstacles after three placed runs in bumpers.

Scudamore secured his double 30 minutes later when winning the two miles and one furlong Class 4 novices’ chase on the Alan Jones-trained Bobbits Way.

Missile Man brought up a double for Best when winning the finale – a Class 6 bumper over a mile and two furlongs – under Dougie Costello.

Plumpton’s next meeting is on February 9. The ticket offer for the fixture on February 23 follows news last week of cut-price or free admission to selected race meetings at Epsom, Kempton, Sandown and Huntingdon.