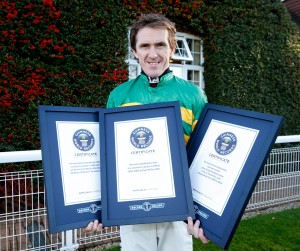 Tony McCoy has admitted that he has been flattered by people’s reaction since he announced earlier this month that he will retire from race-riding this season.

McCoy, the first jockey to ride 3,000 and then 4,000 winners, bagged his 200th winner of the campaign when landing the Grade 2 Betfair Price Rush chase on Mr Mole at Newbury on February 7.

A 20th jockeys’ championship appears certain for the 40-year-old who confirmed on his Cheltenham Festival blog that he has yet to decide on the precise date of his retirement.

“Since I made my retirement announcement I have become a little more used to the idea of retirement, I am even trying to give myself the chance to enjoy it,” the 19-time champion jockey said on his Cheltenham blog.

“I realise that my career is coming to the end but I am happier in myself now it is out in the open rather than when I was keeping it to myself during the two weeks building up to it. So I am a little happier but I know it is going to go quickly and that is the worrying thing.

“The main reason I wanted to announce it when I did was that I didn’t want to get through Cheltenham and Aintree to a point where there wasn’t much news in the racing world and have people saying I was about to win my 20th title and then have someone writing about whether I would or would not carry on. I didn’t want to be reading about that so I thought it best to get my plans out in the open.

“I hoped the day I announced my retirement would never come, and as I said jokingly I have been thinking about it for five years. But in many ways it was five years ago as I thought that if I won another five jockeys’ championships it would be 20 years I had been champion, and that is a long time for a jockey.

“I have always had a fear of riding on too long, and I want people to think I could and should be riding a bit longer rather than people thinking I shouldn’t still be riding. I want to go out while it is still going to hurt me to retire and while I was Champion Jockey, rather at a time when I wasn’t quite so successful.

“I have been very flattered by the reaction I have received but at the same time I find it a little embarrassing as I don’t want people to think I am dragging it out – that was never my intention. I do appreciate the interest, support and good wishes but I still have a job to do, and the guy who has backed me to win doesn’t care if I am retiring or not.

“I had originally thought I would like to go out on one of JP and Jonjo’s horses but I have had a lot of people asking about when my final ride will be and saying they would like to be at the races that day so I maybe need to give it a bit more thought.

“I will try and give everyone notice of when it will be but I am still not sure myself. It won’t be at Cheltenham as I do want another crack at the Grand National, and I intend to make the most of the next few weeks as I know they will fly by.”