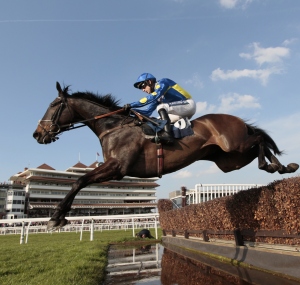 Newbury stage a six-race card for their last jumps meeting of the season on Thursday. Pic: Gavin James/GJ Multimedia (Courtesy of Newbury).

Newbury host their last meeting of the national hunt season on Thursday when they stage a six race card for the inaugural Sri Lankan Raceday.

The feature race is the Class 3 £10,000 Win A Holiday To Sri Lanka Handicap Chase where the betting is headed by The Oliver Sherwood-trained last start winner Morning Reggie, who is down to be ridden by Leighton Aspell.

Trainer and jockey combined to win Newbury’s showpiece race – the Hennessy Gold Cup – this season with Many Clouds, in what the racetrack’s head of communications, Andy Clifton, describes as a ‘memorable’ season.

“The 2014/15 Jump season at Newbury Racecourse was very memorable on many levels,” Clifton said.

“The victory of Many Clouds in the Hennessy Gold Cup was enthusiastically received by the crowd as it represented a significant local success for Lambourn trainer Oliver Sherwood and his team.

“No fewer than six winners at this season’s Cheltenham Festival had previously run at Newbury earlier in the campaign.

“This half-dozen is headed by the remarkable Cheltenham Gold Cup winner Coneygree, who won his first race over fences at Newbury in November and set himself up for Cheltenham with a storming victory in the Grade Two Betfair Denman Chase on February 7.

“We bring down the curtain on the jump season with a competitive six-race card on Sri Lanka Day and racegoers have the chance to win a luxury 10-day holiday to Sri Lanka.”