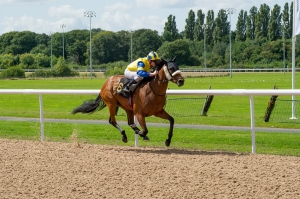 The first race on the new Tapeta surface at Wolverhampton was won the Ed Vaughan-trained Primrose Valley who led all the way in the hands of Frederik Tylicki. Pic: Courtesy of ARC.

Primrose Valley bids to secure another milestone in an already notable career when she contests the £150,000 Unibet Three-Year-Old Sprint on All-Weather Championships Finals Day, at Lingfield Park on Good Friday.

The Ed Vaughan-trained daughter of Pastoral Pursuits has won all four of her starts during this season’s championships; the most recent when getting up late to land a fast-track qualifier at Wolverhampton on March 14.

The victory was her sixth in 12 starts and continued her memorable association with Wolverhampton, where she became the first winner on Dunstall Park’s new Tapeta surface when she landed the 32Red Casino Median Auction Maiden Stakes last August.

The filly is now challenging for favouritism at 5-2 with the Charlie Appleby-trainer Portamento (9-4) in the maximum field of 11 runners and Vaughan has given an upbeat report on her well-being ahead of the five furlong contest.

“Primrose Valley is in good order and seems as well as she was going into her other races,” the trainer said.

“She did a little bit of work on Saturday and I was pleased with her. The thing about her is that she only does enough and she will just do routine canters in the run up to Good Friday.

“Freddie [Tylicki, jockey] felt she was not as good around Wolverhampton as she was around Lingfield. It was a good performance because turning in and even a furlong out I was thinking maybe we had gone to the well too many times, but she showed real guts and determination to get up.

“I suppose she has got to be one of the market leaders because she has beaten everything put in front of her and is taking on most of the same horses.”