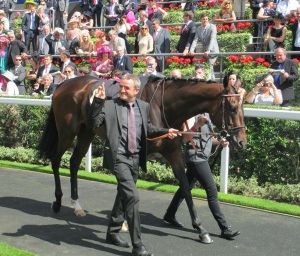 Treve’s price for the Prix de l’Arc de Triomphe is into 3-1 (from 4-1) with Betfred after she made a winning comeback in the Group 2 Prix Corrida at Saint-Cloud today (Friday).

Treve, winner of the past two Arcs, proved far too good for her seven rivals as she scored by four lengths under Thierry Jarnet who rode her to victory in the Arc last year.

Trainer Criquette Head-Maarek has indicted that her next start may be back at the same track in the Grand Prix de Saint-Cloud in June.

The victory follows on from other news in France this week that the Freddy Head-trained dual Group 1 winner Solow was amongst the 39 entries for the £1-million Qatar Sussex Stakes at Goodwood on  July 29.

“I have put Solow in the Qatar Sussex Stakes and we will see how things go for him and make a decision nearer the time,” Head said.

“His next appearance will be in the Queen Anne Stakes at Royal Ascot and we will see where we go from there. He has come out of his run in the Prix d’Ispahan very well and I am very happy with him.

“I want to stick to a mile with him for the moment. He has won over a mile and one furlong, but for the moment I have no plans to go over further.

“We will see later in the season, perhaps in the autumn, about going over further with him again but for the moment the top mile races are his aim.

“He has won on all types of all going and I really think he doesn’t care what the ground is like.

“He seems to be blossoming with age and I hope he can continue to do so.”