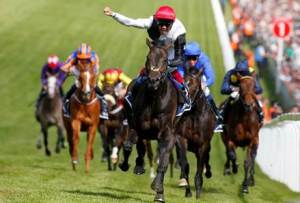 Golden Horn extended his unbeaten record to five wins – that includes victories in the Investec Derby and Betfred Dante – when he landed the Coral-Eclipse at Sandown on July 4 in his first race against older horses.

“Both John Gosden and Mr Oppenheimer have told me that Golden Horn has come out of his win in the Eclipse very well,” Lascelles said.

“John and Mr Oppenheimer will see how he is before making the decision as to whether he goes to Ascot.”

Gosden, successful in the King George VI & Queen Elizabeth Stakes with Taghrooda last year and Nathaniel in 2011, could also be represented by 2014 fourth Eagle Top.

Lascelles, who also advises Eagle Top’s owner Lady Bamford, added: “It is the plan for Eagle Top to go again this year for the King George VI & Queen Elizabeth Stakes.

“It was a good run when he was fourth last year and again last time out [when second] in the Hardwicke. Eagle Top has a good record at Ascot, having won last year’s King Edward VII, and we will give it a go.”

Last year Gosden’s Taghrooda became only the second Oaks winner to land the King George in the same year as winning the Oaks at Epsom Downs, following the successes of Pawneese in 1976.