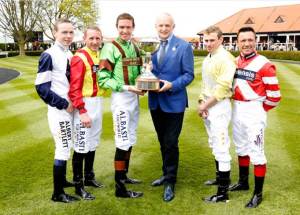 The Grey Gatsby may have the chance to reverse the places with Golden Horn in the Prix de l’Arc de Triomphe at Longchamp in October, trainer Kevin Ryan has revealed.

The Grey Gatsby, winner of the 2014 French Derby and Irish Champion Stakes, was second to Golden Horn in the Coral-Eclipse Stakes at Sandown where the four-year-old carried 11lbs more than the year-younger Golden Horn.

At Sandown Golden Horn was sent to the front of the field of five runners by Frankie Dettori as The Grey Gatsby and Jamie Spencer raced upsides for the bulk of the journey.

The Grey Gatsby looked dangerous two furlongs out but Golden Horn responded well to maintain the advantage. Golden Horn asserted inside the distance to extend his lead and score by three and a half lengths from The Grey Gatsby.

The Juddmonte International at York in August 19 and the Qipco Irish Champion Stakes at Leopardstown in September have been identified by Ryan as likely targets ahead of the Prix de l’Arc de Triomphe on October 4.

“He’s come out of it [Coral-Eclipse] great,” Ryan said.

“We were surprised he didn’t lose much weight as we thought he’d lose more.

“It will be York next, then Ireland and hopefully then on to the Arc.”

The Arc this year is dominated by Treve, who is currently being rested before attempting to win the French showpiece for the third successive year.

Treve is unbeaten in two starts this season, the most recent an easy win in the Group 1 Grand Prix De Saint-Cloud in late June.

The Criquette Head-Maarek-trained five-year-old is expected to return for the Prix Vermeille at Longchamp on September 13.