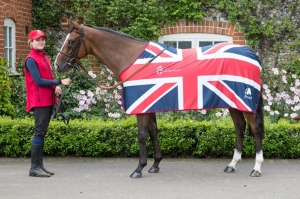 Trip To Paris was second in the prestigious Caufield Cup in Australia on Saturday.

Ed Dunlop has given an upbeat report about the chances of Trip To Paris and Red Cadeaux ahead of the (AUS) $6.2million Emirates Melbourne Cup at Flemington on November 3.

Trip To Paris was cut to 8-1 (bet365) for Australia’s most famous race after finishing second in the (AUS) $3.15million Caulfield Cup last Saturday to Mongolian Khan who is now a 10-1 shot with Sportingbet for the Cup, where the betting is headed by Fair Game (5-1 skyBET).

At Caufield Trip To Paris travelled towards the rear of the midfield before edging closer in the home straight. He stayed on well, despite having to wait for racing room, to finish half a length behind New Zealand raider Mongolian Khan and Dunlop says that he has taken the race well.

“Trip To Paris has come out of the Caulfield Cup very well – he lost five kilos during the race but has already put it all back on,” Dunlop said of his charge who won the Gold Cup at Royal Ascot 2015. “Although you always want to win, it was a fantastic trial for the Melbourne Cup as we know that he will be better over further. Tommy Berry will keep the ride.”

Red Cadeux (33-1) is contesting the Melbourne Cup for the fifth successive year and has finished second three times. The nine-year-old is now within touching distance of creating history as the first British-trained runner to win £5million in prize money.

“Red Cadeaux did his second piece of work out there [on Tuesday morning] and has made a big step forward,” Dunlop continued. “We sent him in as good a condition as we ever have and he loves the individual attention that he receives on his travels – he really seems to blossom for it.”

“He is now just £1,500 away from being the first British horse to earn £5 million and while my staff deserve an enormous amount of credit for the fantastic job that they have done with him, so does his owner, Ronnie Arculli, who is so often the forgotten man in all of this, for his bravery and patience.”