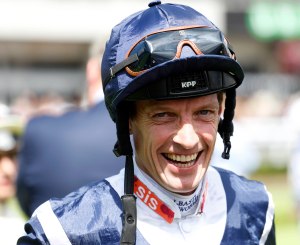 Richard Hughes trained his first winner when Duchess Of Marmite won the opening race at the twilight meeting at Kempton Park on Wednesday evening.

The three-time champion jockey retired from riding during the summer and Duchess Of Marmite was his 12th runner since taking out a trainer’s licence this year.

Hughes’ charge was sent off the 9-4 favourite in the two mile, Class 6, 32Red On The App Store Handicap. She was steadied at the start by jockey Shane Kelly, before making headway in the straight to score by a neck.

The victory follows news of Hughes move to Lambourn from Hampshire last weekend, where he is now based at Weathercock House Stables.

The historic yard was the base of Grand National winning trainer Jenny Pitman and for three years was the yard used by successful trainer Warren Greatrex, who has since moved to Uplands Stables, the former base of legendary national hunt trainer, Fred Winter.