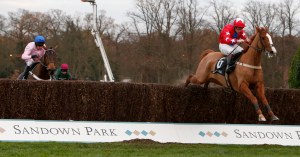 Sire De Grugy will contest the Sodexo Clarence House Chase at Ascot on January 23 enroute to the Betway Queen Mother Champion Chase at the 2016 Cheltenham Festival.

The 10-year-old won the Queen Mother in 2014 and appears set for a rematch with 2013 winner Sprinter Sacre who is also amongst the Clarence House entries and narrowly beat Sire De Grugy in the williamhill.com Desert Orchid Chase at Kempton last month.

There the Gary Moore-trained Sire De Grugy raced close to the pace throughout the two mile contest. He led, but then made a mistake at the last fence when headed by Nicky Henderson’s Sprinter Sacre and fought well finish a close second.

Moore was impressed with the effort and believes that the dual Tingle Creek Chase winner will improve for the run.

“If he hadn’t got in tight to the last it probably would have been a different result,” said Moore.

“He’ll come on again for that run, I’m sure, he improves with racing. He’s all set for the Clarence House.

“It can’t be soft enough for him so I hope it carries on raining.

“When we had Sprinter Sacre off the bridle I thought we had him beaten because all his winning had been done on the bridle. Fair play to him, though, as he showed he can also battle to win.”