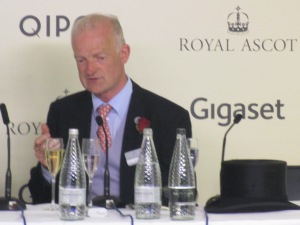 Un De Sceaux justified his position at the head of the market for the Betway Queen Mother Champion Chase with a resounding victory at Ascot on Saturday.

The 2015 Arkle winner led from the outset in the Grade 1 contest and maintained the advantage with a clinical display of jumping. He shook off the late challenge of 2014 Champion Chase winner Sire De Grugy to score by five lengths under Ruby Walsh.

The success continued the eight-year-olds unbeaten record in completed starts and he has now won 14 times and fallen twice in 16 runs.

“He’s probably got a lot more respect for his fences now. You could see him pricking his ears going to the fences, sorting out his stride, and that’s what he needed to learn. He settled into his own rhythm and jumped at his own time.

“Ruby just sat there and let him sort himself out. It was much better today. I’m hoping Sire De Grugy ran well and that they weren’t disappointed but when you take that level of form it’s looking better for us I imagine.”

Un De Sceaux is best priced at 4-5 for the Champion Chase and continues the stranglehold on feature races at Cheltenham by the Ireland-based Mullins who is now 10-11 favourite to win the British Trainers’ Championship this season.

Un De Sceaux’s win at Ascot was preceded by the Grade 2 victory of Vroum Vroum Mag, now second favourite behind Thistlecrack for the World Hurdle. She occupies the same position in the betting for the OLBG Mares’ Hurdle which is headed by stablemate Annie Power.

Mullins continued the good form on Sunday at Leopardstown where 2015 Stan James Champion Hurdle winner Faugheen thumped his rivals in a Grade 1 and is now best priced at 2-5 to retain his Champion Hurdle crown.

Mullins’ Cheltenham team looks so strong that he is even money to train nine winners or more at this year’s Festival and the trainer fully appreciates the strength of his runners which he describes as ‘unbelievable’.