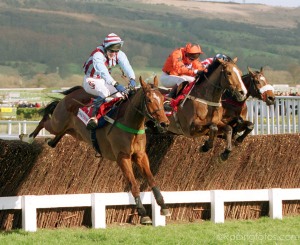 Willie Mullins has given an upbeat report on the well-being of Un De Sceaux, the hot favourite for the Betway Queen Mother Champion Chase at Cheltenham on March 16.

Un De Sceaux was an impressive winner of his sole start at Cheltenham when storming to a six-length victory in the Grade 1 Racing Post Arkle Challenge Trophy at last year’s Festival.

The winner raced prominently throughout the two mile contest and proved far too good for his rivals to easily justify his starting price of 4-6.

The eight-year-old looks set to go off at similar odds for the 2016 Queen Mother where he is best priced at 8-11 with Paddy Power after his last start victory at Ascot where he finished five lengths ahead of second-placed Sire De Grugy, who won the Queen Mother in 2014.

“Un De Sceaux is in terrific order and I would love it if the Betway Queen Mother Champion Chase was tomorrow. I am counting down the days,” Mullins said at a stable visit organised by Cheltenham racecourse on Monday.

“We will probably do a school at a racetrack before Cheltenham. I would love it if yesterday’s schooling was this Sunday because Leopardstown is a great place to school. We will squeeze him in somewhere with a few others.

“What I loved about his win at Ascot was his style of racing. He switched off and sized up his fences instead of charging down and flying out over them.

“It was the most mature performance I have ever seen him put in. He did everything right and had plenty in the tank to pull away at the end.”