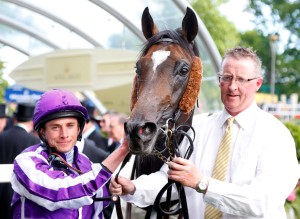 Minding was an easy winner of the QIPCO 1000 Guineas on Sunday, the victory impressing bookmakers who fancy her to beat the colts in the Investec Derby next month.

The three and a half length success secured a 1-2-3 in the fillies’ mile Classic for trainer Aidan O’Brien who also saddled runner-up Ballydoyle and third-placed Alice Springs.

Minding raced close to the pace for Ryan Moore before taking it up two furlongs out and stayed on strongly to secure a commanding victory.

with a run for the Investec Derby with several high-street bookmakers that includes Ladbrokes, Paddy Power and William Hill.

She has also been entered in the Tattersalls Irish 1000 Guineas and Investec Oaks and O’Brien is confident she will stay the mile and a half distance of the Derby and Oaks.

“She won the Moyglare before coming here so she was always high class and her mum and dad (Galileo and Lillie Langtry) have been good friends of ours for a long time now. She’s a pure homebred so she is very exciting,” O’Brien said.

“Ryan was happy to ride her handy as there wasn’t as much pace on as we expected. Everyone was confident at home that she was very fit and she really galloped home strongly. All the Galileo’s are like that, they don’t stop.

“She’ll definitely get a mile and a quarter and usually if they are classy over that trip they will get the mile and a half fine.

“The Oaks would be the obvious race for her now but there is the Irish Guineas first, we could go there and then step her up in trip after. Obviously the guys will have to sit down and talk about it, everyone will be involved, and we’ve got plenty of options.

“I get personal satisfaction for everyone back at home, it’s a team effort and a lot of hard work goes into preparing these horses at home.”

Moore added: “It was a very smooth performance and she travelled like the winner throughout, I never really thought I would get beat on her.

“I wouldn’t know where she will go next but I would think she would stay a mile-and-a-half.”