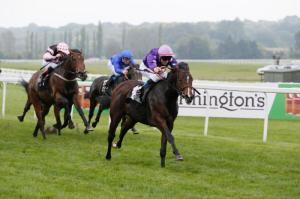 NEWBURY RACECOURSE finished their flat season on a high when they were named best overall racecourse caterer at the National Racecourse Catering Awards.

The Berkshire racecourse, located an hour’s train journey from London Paddington, won top honours at the awards which were held at Doncaster Racecourse on Friday.

Along with bagging the top prize – the Judges Catering Excellence Award for the best overall racecourse caterer – Newbury also won the Best Mobile Fast Food Experience Award for their use of Charcoal Grill and Rotisserie providers Carbonis and Best New Catering Concept for the Honesty Catering’s Afternoon Tea Picnics on Betfred Ladies Day.

Martin Wales, head of catering at Newbury, was understandably thrilled with the accolades: “We are delighted,” he said. “To win three awards, including the overall one, and be shortlisted in the other six categories for which we entered is a fantastic achievement.

“We are passionate about providing the best quality and variety of food, together with excellent service, to our customers and awards like this are a reflection of the hard work put in by our staff.”

The awards came midway through Newbury’s last flat meeting of the year on Friday and Saturday, where trainer Ralph Beckett and jockey Fran Berry combined to win three races that included the Group 3 Worthington’s Alzheimers Society Stakes with Pleaseletmewin.

Pleaseletmewin’s victory in the seven furlong contest completed a first and second race double on the second day for trainer and jockey who combined to win the opening mile maiden with US$1million purchase and debutant Crimson Rock.

“We were delighted with Crimson Rock. She was purchased to be a broodmare and has now won first time out, which is great,” said Beckett of the daughter of Fastnet Rock who was sent off joint favourite at 7-2 and justified the market confidence to win by a neck.

“She appreciated the cut in the ground but had to do it the hard way because she was racing away from the other two fillies.”

Sound Bar provided Beckett and Berry with their first winner of the meeting when landing Division II of the one mile maiden race on Friday.