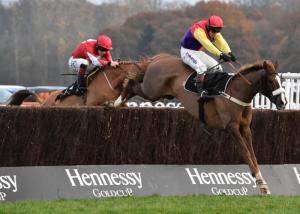 Native River was one of three winners for trainer Colin Tizzard at Newbury. (Pic: Courtesy of Newbury Racecourse).

COLIN TIZZARD is 6-4 with bookmaker Paddy Power to win the 2017 Cheltenham Gold Cup where the trainer is responsible for three of the leading entries.

Native River boosted his credentials as a contender for chasing’s biggest prizes when winning the Hennessy on Saturday, the second leg of a treble on the day for his handler who also scored with Thistlecrack and Ultragold.

Native River raced close to the pace throughout the three and a quarter mile contest that carried prize money of £200,000. He picked up well in the closing stages for jockey Richard Johnson to win by half a length.

“Everything was right for Native River today and we expected a big run,” Tizzard said. “I think he travelled better today than he ever has and he jumped beautifully. He only just won in the end but I can’t believe it.

“Nowadays, we don’t take horses for three-mile gallops; we just work them on our system. Loading him up this morning, I made a point of being there when he loaded up and he looked fine. Everything was right today – good ground, a flat left-handed track and it was a big race.

“He wouldn’t be the fastest on the gallops. He actually won a gallop last year and we were terrified. Richard said that he went clear and looked like he was going to win by almost five lengths at one time but then the other nearly got to him and he went again. That’s the sign of a good, honest, strong stayer.

“He had a tough race at Wetherby last time which put him right for this. I don’t know where we go from here. If he was in the same form as this in March, we would have to think about the Gold Cup. Hennessy winners are often right up there with the best of them so we would have to consider it.”