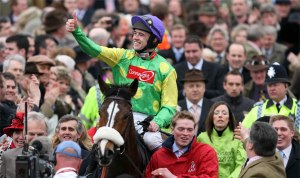 Paul Nicholls believes Saphir Du Rheu deserves his place in the Timico Cheltenham Gold Cup field that has been depleted by the defection of hot-favourite Thistlecrack due to a tendon injury.

News of the Colin Tizzard-trained Thistlecrack’s defection broke as Nicholls was hosting a stable visit organised by Cheltenham Racecourse at his stables in Somerset.

The betting for the Gold Cup is now headed by Thistlecrack’s stablemates Native River (3-1) from Cue Card (10-3), but Nicholls believes that his 40-1 shot Saphir Du Rheu could fill a place the feature event of the Cheltenham Festival.

“Saphir Du Rheu is back on track and won nicely at Kelso the other day and before that ran really well at Cheltenham, when second [over two miles and five furlongs in Grade 3 at Cheltenham on January 28] over an inadequate trip,” Nicholls said of the eight-year-old winner of nine races.

“He fell in the Hennessy when I thought he had a big chance and that might have just woken him up. He had a fairly bad fall and everything galloped over him.

“Since that day, he has jumped very, very well. If he can jump and get his act together, he is a good horse. I am not saying he is going to win a Gold Cup.

“Andy [Stewart – owner], had a decent chaser called My Will a few years ago, probably not as good as Saphir Du Rheu, and he ended up finishing fourth in the Gold Cup.

“You never know, Saphir Du Rheu could pick up some crumbs in the Gold Cup and get placed now. He deserves to be in the race’s line-up.

“We thought he would be a superstar when he won a Grade 1 at Aintree [in April, 2015] but he lost his way a little bit. He has plenty of ability and we have not seen the best of him yet.”

The trainer added that he sympathised with Thistlecrack’s connections. “It is sad for Colin and the owners – a blow to everyone. I am sure Thistlecrack will be back,” Nicholls said.

“It is a nightmare, a lot of things can happen to horses between now and The Festival. These horses are athletes and there are always going to be training problems. You get niggles and injuries when you are pressing buttons. It is in the lap of the gods – you are always on edge.”