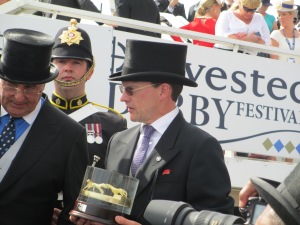 Aidan O’Brien bids to add to his big-race successes when he saddles the favourites for the 1000 Guineas and 2000 Guineas at Newmarket this weekend.

RHODODENDRON is taken to secure back to back victories in the QIPCO 1000 Guineas at Newmarket on Sunday for Aidan O’Brien who won the fillies’ classic in 2016 with Minding.

Rhododendron, by the O’Brien-trained Epsom Derby winner Galileo and out of his Irish 1000 Guineas winner Halfway to Heaven, heads the betting at 15-8 and is one of three runners for the trainer who also saddles Winter (7-1) and Hydrangea (14-1).

The Ballydoyle maestro is gunning for his fourth victory in the one mile contest, having also won the race with Virginia Waters (2005) and Homecoming Queen (2012).

O’Brien is upbeat about the chances of Rhododendron who is having her first start since landing the Group 1 Dubai Fillies’ Mile, from stablemate Hydrangea, over course and distance last October.

“Rhododendron is a very nice filly and she won the Fillies’ Mile well last year,” he said.

“She got a mile well as a two-year-old last year so you would imagine she’ll get a good bit further this year.

“We’ve been happy with her since last year and physically she’s done very well,” O’Brien told At The Races.

Meanwhile, the trainer is pleased with the preparation of long-time QIPCO 2000 Guineas favourite Churchill who heads the betting at 5-4 in a boutique field if 10 runners on Saturday.

“So far so good,” O’Brien said. “Everyone has been happy so far and everything has gone smoothly.

“There are only 10 in it but I think all the main ones are there, all the trial horses and the French horse Al Wukair.

“He’s a straightforward horse, last year he just used to follow the leaders.

“I don’t see the small field as a problem – I suppose it would be better for the race if they came up in one group rather than split into two.

“It’s a high-quality race. All the horses you’d expect to be there are there, whereas in other years there might be some lesser horses.

“Obviously we haven’t given him a run, but he’s been away. Donnacha (O’Brien) rides him every day and is very happy with him.”