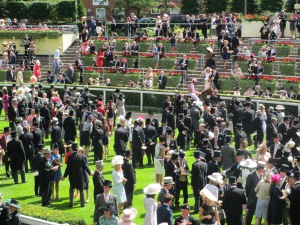 HIGHLAND REEL is fancied to secure another big prize by winning the Group 1 Prince Of Wales’s Stakes on the second day of Royal Ascot on Wednesday.

The globe-trotting five-year-old has already bagged over £5.5 million in prize-money in a phenomenal career that includes winning the King George VI and Queen Elizabeth Stakes at Ascot last year.

The Aidan O’Brien-trained entire has continuously been campaigned at the highest level. Last season he also won the Longines Breeders’ Cup Turf at Santa Anita, between finishing second in the Qatar Prix de l’Arc de Triomphe and runner-up in the Longines Hong Kong Vase at Sha Tin.

He was last seen when producing a tenacious display to win the Investec Coronation Cup at Epsom just hours after overcoming severe difficulties in the flight over from Ireland to secure his fifth Group 1; which have been recorded on three different continents.

O’Brien’s horses had all arrived late on Oaks day at Epsom, having been held up on the runway in Ireland because the plane’s fuel cap was missing and fuel was spilling out over the wing.

The trainer was winning the Coronation Cup for a record eighth time and was thrilled with the manner of the victory: “I’m delighted with Highland Reel,” he said. “They [the Ballydoyle runners] obviously went through a lot today and were here just before the race.

“Things weren’t going smoothly but everyone was doing their best and did a great job. Thanks to everybody involved.

“Highland Reel is an amazing horse. Tactically, he has speed and he stays. He’s very versatile.

“He never showed any softness in his life. He’s been travelling since four am this morning and has only been here an hour,” O’Brien said immediately after the race. “He didn’t have a lot of time to do anything – he had his piddle, got washed off and then came into the paddock. And he hasn’t run since Dubai [on March 25], which was a good while ago.

“[Ballydoyle staff member] David was delighted with him at home along with Andrew and Davy, and Ryan [Moore] gave him a great ride.”