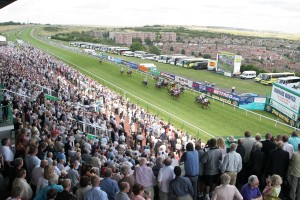 Brighton is one of the 16 racecourses operated by Arena Racing Company and is located in a unique setting near the south coast. (Pic: Courtesy of ARC).

BRIGHTON Racecourse is the latest course owned by Arena Racing Company (ARC) to reveal a new sponsorship deal after Marathonbet was announced as backers of a three-day meeting next month.

The undulating horseshoe-shaped track on the outskirts of Brighton on the hills overlooking the sea is one of 16 racecourses owned by ARC and one of the company’s four tracks in the south east along with Lingfield Park, Royal Windsor and Fontwell Park.

The meeting has been named the Marathonbet Festival of Racing and is set to be staged on three successive days from Wednesday August 9 to Friday August 11 with six races carrying the name of the new sponsors.

“We’re delighted to have Marathonbet on board for the Brighton Festival of Racing in August,” said Sam Windridge, executive director of Brighton Racecourse, whose next meeting is a twilight fixture on Tuesday, July 11. “They have made great strides in recent years with a series of high-profile sponsorship agreements in the UK and abroad. We’re now looking forward to becoming part of the trusted Marathonbet experience and building a lasting relationship for the future.”

The sponsorship deal follows news that William Hill are the new sponsors of the Group 1 St Leger Stakes, the fifth and final Classic of the season which is contested at the ARC’s Doncaster Racecourse in September.

ARC, chief executive, Martin Cruddace, said: “We are delighted William Hill have become the new sponsors of the St Leger. We really enjoy working with their team and look forward to extending this to our feature racing festival of the year. William Hill have the brand, vision and team to help build on the success of both the four-day festival and the feature race, the St Leger, which continues to be one of the most important races in the British Racing calendar.”