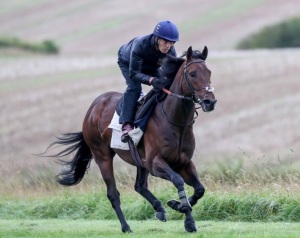 The ground is currently good to soft at Haydock who they have announced this evening (Wednesday) that the Sprint Cup will be moved the third race at 2.25pm (from 4.10pm) to ensure the best possible ground is available after up to 20 millimetres of rain was forecast for Saturday morning.

Harry Angel holds the course record for six furlongs at Haydock and is best priced at 9-4 for the Group 1 contest over course and distance that carries total prize money of £260,000.

The three-year-old clocked 1m 8.56s to set a new record on good ground there in May when he led throughout to score by four and a half-lengths in the Group 2 Armstrong Aggregates Sandy Lane Stakes.

The son of Dark Angel was then second to Carravaggio in the Group 1 Commonwealth Cup at Royal Ascot before inflicting the first defeat on his Ascot conqueror when landing the Group 1 Darley July Cup at Newmarket.

The Clive Cox-trained colt’s opponents on Saturday include Newmarket third, Brando, who has since landed the Group 1 Prix Maurice de Gheest at Deauville. The Tin Man and Tasleet, first and second in the Group 1 Diamond Jubilee Stakes at Royal Ascot also feature in the entries.

Speaking from his Lambourn stables earlier this week, Cox said: “We are very happy with Harry Angel. He has trained really well and he is in a really good frame of mind. We are very much looking forward to Saturday.

“It looks like we are going to have slightly different ground conditions [compared to Haydock Park in May, when the ground was officially Firm], but the track holds no fears as he showed when breaking the track record which we are very proud of.

“Ground wise, he has won on good to soft in the Mill Reef at Newbury last year. I am quite relaxed, but I think all of us would prefer to see less rain than more rain because we have seen how potent he is on a sounder surface.

“It is a Group 1 and there are a lot of horses who deserve a lot of consideration and respect. That is the same with any race really. I was impressed with Brando in Deauville and his form was pretty good before that when just up behind us in the July Cup.

“There are half a dozen in there that you would give a realistic chance to, as you would expect in a Group 1 race. The Sprint Cup is always a top-class race and one of the iconic sprints of the season. I am happy with our horse and would not be swapping him for anything.

“Group 1 races are of such a standard that it is nice to have that ability to give horses gaps between their races. The time from the July Cup to here is a healthy period.

“We were all very excited going into the July Cup and I think Adam’s [Kirby, jockey] visible delight when he crossed the line was clear to all. It was not a shock to us and we hoped we could beat Caravaggio. His performance there proved that he is top flight.

“I think being by Dark Angel and with any sprinter, maturity means the potential is there for more improvement. He has grown up and even watching him this morning, he is enjoying the attention. That is down to maturity. He is enjoying his racing and Kevin Harris, who rides him at home, has done a brilliant job on him.”