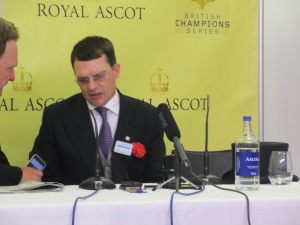 The five-year-old has won three of his six starts this campaign and finished close up in the others and arrives at Ascot in “top form” after finishing fourth in the Prix de l’Arc de Triomphe won by Enable at his last start.

The 2016 Ascot Gold Cup winner’s three wins this term include the Corner Group International Irish St Leger and St Leger Trial. Earlier this season he narrowly failed to land back to back Gold Cups when beaten a short head by Big Orange at Royal Ascot.

The winner of more that £1.6 million in prize money has won on going ranging from ‘Good to Firm’ to ‘Soft’ and is the one to beat in the two mile contest which is the opening race on British Champions Day 2017.

“He may not have much in hand of the field on official ratings and has been on the go since April – and he didn’t  run up to his best when fourth in this race last year – but he comes here in top form and is clearly the one to beat,” Moore told Betfair.

“For the second year running he ran his race in the Arc last time – and his fourth this year was probably at least on a par with his third last season – and you could make a fair case that his earlier defeat of Torcedor in the Irish St Leger was up there with his very best efforts.

“If it turns testing then that won’t be any hardship for him at all, and it will certainly appear to suit him more than his main form rival Big Orange, who inched him out in the Gold Cup.

“There is also an extra week’s break between Chantilly and Ascot this year, which is in his favour.

“But this is no two-horse race as some of these are very capable stayers on their day, and of course the three-year-olds have been doing well in these contests all year, so you have to respect Leger third Stradivarius and Doncaster Cup winner Desert Skyline.

“Stradivarius is possibly the one to fear most stepping back up in trip and, while Desert Skyline has to improve, I thought he did well to beat me on Thomas Hobson last time.”