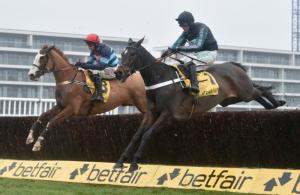 Altior (right) on his way to winning the Betfair Exchange Chase on an informative day at Newbury. (Pic: Courtesy of Newbury Racecourse).

Betway Queen Mother Champion Chase favourite Altior is reported to be in “very good” order ahead of his bid to secure a third successive win at the Cheltenham Festival.

Altior is unbeaten in 12 runs over obstacles and recorded his seventh successive win over fences when proving far too good for his rivals in the Grade 2 Betfair Exchange Chase over an extended two miles at Newbury last month.

The four-length victory over reigning Betfair Tingle Creek Chase winner Politologue was all the more impressive as it was the eight-year-old Altior’s first run for 287 days.

The Nicky Henderson-trained gelding was sidelined after a breathing problem was discovered – which required wind surgery – while being prepared for the Grade 1 Tingle Creek Chase at Sandown in December.

The trainer was delighted with how well the son of High Chaparral has done since his impressive comeback success.

“Altior is very, very good after Newbury,” Henderson said. “Newbury was as a good as one could have possibly hoped for. The timing of the race was fantastic.

“He dropped his bridle and, while the ground was plenty soft enough for him, he was just very sensible the whole way. He raced sweetly and jumped beautifully – you just couldn’t have written the script.

“From a weight point of view going into Newbury, he wasn’t far off his usual weight so to his credit, he held onto his condition very well after his wind operation.

“If you take a fit horse and go from training to zero in one move, you are stopping on one date and that was it for a month and very often they will fall to pieces on you.

“When he is cantering, he finds everything so easy. He is just actually different class. I think that is what it was at Newbury and that gets you a long way. He looked great and we could crack straight on. Nico [de Boinville – jockey] gave him a great ride at Newbury and Sam [Twiston-Davies riding Politologue] gave us a great lead.”

John Hales, the owner of second placed Politologue, said: “We were beaten by a better horse on the day. The winner is an exceptional horse but we will take him on again.”

Sam Twiston-Davies added: “There was nothing disappointing about it. He jumped, travelled and did everything right but was just beaten by a very good horse. He’s a freak.

“Nico told me he was going to make it but he didn’t, so I did and I went a nice, even gallop. It was a fair animal to get past because we really picked up after the ditch and winged all the way up the straight.”