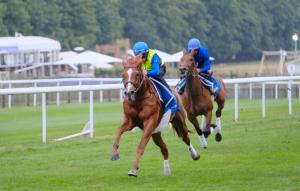 SANDOWN Park has ensured racegoers at the Coral-Eclipse can watch England’s World Cup quarter-final match with Sweden in Russia on Saturday.

The 2018 Coral-Eclipse is the richest race ever staged at Sandown with prize money of £790,625. The monster pot is the result of a 50 per cent increase on last year’s £500,000 to £750,000. The balance comes from the supplementary entry fee paid by connections of Masar, the Investec Derby winner and pre-race favourite for Saturday’s 10 furlong contest.

The last race on the seven-race card, which are all sponsored by Coral, is timed for 3.55pm – or half time in the England Germany decider that kicks of at 3.00pm UK time.

David Stevens of Coral commented: “Golden Horn (2015) was the last Investec Derby winner to go on and win the Coral-Eclipse, and the betting has Masar in pole position to emulate that colt and the likes of Sea The Stars and Nashwan.”

The feature race is now set for a mouth-watering showdown between the top three-year-old colts in the UK. Three of the first four home in the Investec Derby are set to lock horns again, following news that QIPCO 2000 Guineas winner and Investec Derby fourth, Saxon Warrior, features amongst the eight acceptors that also includes Epsom third, Roaring Lion.

The going at Sandown Park is currently Good to Firm, with the forecast for conditions to remain dry, with temperatures in the high 20s.

Watering is ongoing, with cycles of 10 millimetres. The course has received 35 to 40 millimetres of irrigation per week.