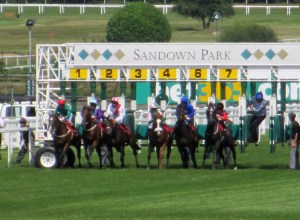 FRANKIE Dettori has said he is pleased with Enable’s preparation ahead of the dual Prix de l’Arc de Triomphe winner’s comeback in the Group 1 Coral-Eclipse Stakes at Sandown on Saturday.

The five-year-old has not raced since winning the Breeders’ Cup Turf at Churchill Downs in November to extend her unbeaten sequence to nine starts in a spectacular career that has amassed prize money of £8 million from winning 10 or her 11 starts.

The John Gosden-trained mare faces a maximum of seven rivals in the £750,000 contest which is the centrepiece of Sandown Park’s two-day Coral Summer Festival, which commences on Friday, July 5.

Gosden and Dettori are targeting their third win in five years in the Coral-Eclipse after combining to win the 10-furlong contest with Investec Derby winner Golden Horn in 2015 and Roaring Lion (2018), whose victory in this race was the first of his four successive Group 1 victories last season.

Gosden is no stranger to winning the Coral-Eclipse with a runner having their first start of the season, having achieved the feat with Enable’s sire Nathaniel in 2012 and Dettori, who has ridden Enable in nine of her 10 wins, is looking forward teaming up with the champion again.

“Riding Enable the last month, she’s coming along nicely,” Dettori said. “We missed Royal Ascot because we felt two more weeks [off the track] would’ve been better for her.

“Her preparation has gone well. She hasn’t raced since the Breeders’ Cup but she’s a champion and I am very much looking forward to riding her again to show the public that she is still here.

“She’s been working okay. She is notoriously not a very good work horse so it’s very hard to gauge. Fitness has been an emphasis and priority at the moment and she has come through really well. We are very pleased with her preparation.

“When you go to those kinds of races you have to be fully showing up. She hasn’t run since the Breeders’ Cup so you would have to think she’s entitled to improve a little bit for the race, but we go there as fit as we can get her and ready to go.”