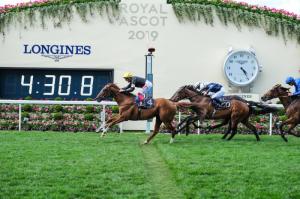 Stradivarius finishes ahead of Dee Ex Bee (2nd – far side), Master Of Reality (3rd) and Cross Counter (4th) in the Gold Cup at Royal Ascot. (Pic: Courtesy of Royal Ascot).

The Group 1 contest is the feature race on the opening day of the festival which is contested from July 30 to August 3 in Goodwood’s unique setting with views over the Sussex Downs.

Johnston bagged the first of his five wins in the Goodwood Cup in 1995 with Double Trigger, who went on to secure a hat-trick in the valuable event thanks to back-to-back wins in 1997 and 1998.

Royal Rebel (2000) and Darasim (2004) added to the tally and the Johnston team have confirmed the Goodwood Cup is the immediate target for Gold Cup second Dee Ex Bee who was beaten a length by Stradivarius in the stayer’s feature at Royal Ascot.

The Mark Johnson-trained four-year-old this season won two Group 3s before Royal Ascot, where he led or raced close to the pace for the bulk of the two and a half mile event, only to have no answer for the late challenge of the 2017 and 2018 Goodwood Gold Cup winner Stradivarius who is set to re-oppose.

Charlie Johnston, assistant to his father Mark, said: “Dee Ex Bee has come out of the Gold Cup well and although we are no longer in the running for the WH Stayers’ Million, the Qatar Goodwood Cup looks a fairly obvious next target.

“We were very pleased with the horse [at Royal Ascot]. I don’t think there was any reason not to be.

“It was a great run in defeat and again he showed what a fantastic attitude he has, coming from looking like he would finish third or fourth at the furlong marker to getting back up for second in the final stride.

“The winner is a true champion who has shown now over the last 18 months that regardless of what conditions are thrown at him, he finds a way to win. And on that particular day, Frankie [Dettori] at one stage seemed almost invincible.

“Going forward, we are thinking that it is probably not ideal for our horse to make his own running. Having something to aim at might help him, as he enjoys a battle.

“We came off second best and are under no illusions that the winner will start favourite again, but we are looking forward to having another crack at him.”

The 2018 Melbourne Cup hero Cross Counter (Charlie Appleby) is another on course for the Qatar Goodwood Cup after faring best of those who came from off the pace in the Gold Cup, finishing a close fourth. The classy four-year-old is no stranger to success at Goodwood, having lowered the 12-furlong course record in last season’s Group 3 Qatar Gordon Stakes, in which Dee Ex Bee finished second.