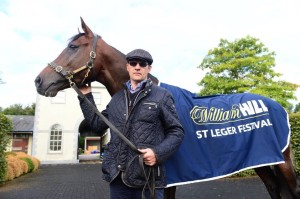 AIDAN O’Brien is targeting a third successive win in the £700,000 William Hill St Leger where his entries are headed by Sir Dragonet.

A maximum field of eight runners are set to contest the last British Classic of the season where the betting is headed by the unbeaten Logician (10-11), followed the O’Brien-trained duo Sir Dragonet (3-1) and Il Paradiso (6-1) who are two of three entries for the Irish handler who will also be represented by 50-1 outsider Western Australia.

Sir Dragonet was beaten by less than a length in the Investec Derby won by stablemate Anthony Van Dyck, before returning to the track last month when fourth in a Group 3 at the Curragh.

Connections are pleased with his progress and look forward to him contesting the prestigious one mile, six furlong and 115-yard contest.

O’Brien said: “We’re very happy with him. He had a break after the Derby and then the plan was to go to the Curragh and then maybe we would look at the Arc after that run.

“But now Japan and Magical are there and things are changing all the time.

“The William Hill St Leger is a very important and prestigious race and we felt like there was a good chance that he would get that trip.

“He was just ready to start at the Curragh and he got a little bit tired which he was entitled to do as I was being very careful and gentle with him.

“It was also the first time he had run over that trip. He’d always been over a mile and a half.

Il Paradiso will join him in the Group 1 contest after pleasing the Ballydoyle team when third to Stradivarius over an extended two miles at York.

“Il Paradiso stays very well and that’s why we ran him at York. We thought he was worth taking a chance and he ran a very respectable race,” O’Brien continued.

“It was a good run for a three-year-old. He looks like a horse that will get the Gold Cup trip in time so has plenty of stamina”

“But I think he’ll be happy enough dropping to this trip, he doesn’t mind being ridden forward and we’ll ride him like we’re sure that he stays.”