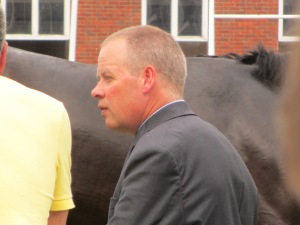 Clive Cox describes Positive as ‘a nice horse who is still on an upward curve’.

CLIVE Cox has given an upbeat report on Positive ahead of his rematch with the unbeaten Pinatubo in the Group 1 Darley Dewhurst Stakes at Newmarket on Saturday.

The thrice-raced Positive won on his debut at Salisbury before running on well to finish five lengths adrift of 2000 Guineas favourite Pinatubo in the Group 2 Vintage Stakes at Glorious Goodwood. The son of Dutch Art followed up with a narrow victory in the Group 3 Betway Solario Stakes at Sandown Park last month.

Cox is hopeful his charge will narrow the previous five-length margin with red-hot favourite Pinatubo who heads the betting at 1-3 for the seven-furlong contest that carries total prize money of £523,750.

The Dewhurst has attracted a field of 11 runners that includes Group 2 Juddmonte Royal Lodge Stakes scorer, Wichita, supplemented at a cost of £40,000 and is one of five runners for Aidan O’Brien.

“Positive has done really well since he won the Solario,” Cox said of his charge who is best-priced at 16-1 for Saturday’s feature race. “He had a proper race that day and also impressed us very much when coming up against Pinatubo on his previous run.

“Like everyone else I have been extremely taken with Pinatubo, there’s no disputing his quality, but I am hopeful that Positive can show the necessary improvement to close the gap to him on Saturday.

“We have had a dry summer, so my opinion may be based more on theory than fact, but I would like to think that Positive will be at home on the type of easier ground he is likely to encounter on Saturday.

“The Darley Dewhurst is a benchmark race which points forward to next year’s Classic contenders and, while I appreciate it is a hot contest again this year, I am very happy that I have a colt good enough to be in the line-up.

“My only two previous runners have both been placed [Kodi Bear was second in 2014 and Xtension third in 2009] and Positive is a nice horse who is still on an upward curve.”