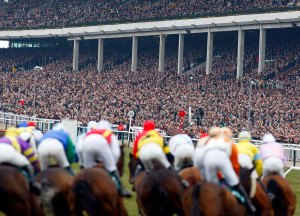 CHELTENHAM host the first major event of the national hunt season when they stage the two-day ‘The Showcase’ meeting on Friday and Saturday this week.

The fixtures comprise two seven-race cards highlighted by two £60,000 handicap chases on Saturday – the Matchbook Betting Exchange Handicap Chase over three miles and one furlong and the Randox Health Handicap Chase over one mile seven furlongs and 99 yards.

Friday’s card commences at 2pm with the £20,000 Ballymore Novices’ Hurdle where Irish handler Charles Byrnes is represented by Dr Duffy, the first of two last-start winners the trainer has entered at Cheltenham’s first meeting of the season.

Dr Duffy impressed with the manner of his four-length victory in a two-miles and six-furlong contest at Navan last month, where the consistent six-year-old – who has won four and placed six times in 13 starts – was given a patient ride.

Dr Duffy was held up towards rear until improving the position four fences out to track the leaders. He led before the next fence and despite being strongly pressed approaching the last obstacle, stayed on well to draw clear in the run-in to justify market confidence that saw him backed in to 9-4 favourite from 11-4.

“The plan at the moment is to send both Doctor Duffy and The Big Galloper to Cheltenham this week,” said Byrnes of his entries who will both be ridden by three-time Irish Champion jockey Davy Russell.

“Doctor Duffy is very consistent and does not know how to run a bad race.

“He likes good ground and a galloping track suits him well. He is a nice horse to have.

“The Big Galloper did well to win at Roscommon and he goes for the two and a half-mile handicap hurdle.”

Elsewhere on Friday’s card, Dan Skelton will pit unbeaten mare Getariver against the geldings in the £15,000 Foundation Developments Ltd Maiden Hurdle over an extended two miles.

The Irish point-to-point graduate has won all of her three starts, opening her account with a three-length victory in her sole start between the flags, then landing a bumper impressively at Ludlow on her Rules debut in January. She then defied a penalty to win a similar contest at Newbury in March.

Skelton said: “We will have a number of runners at The Showcase, including Getariver in the maiden hurdle on Friday.

“She is a horse we like. She won both her bumpers and is obviously very smart.

“We are looking forward to getting her started over hurdles.”