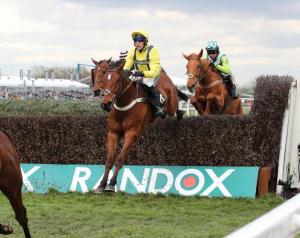 LOSTINTRANSLATION bids to supply Colin Tizzard with this third win in five years in the Ladbrokes King George VI Chase at Kempton Park on Boxing Day.

Tizzard won Kempton’s blue riband event with Cue Card (2015) and Thistlecrack (2016) and has a great chance of adding to the tally with Lostintranslation who remains on target for the £1 million Jockey Club Chase Triple Crown after his victory in the Betfair Chase.

The £1 bonus goes to any horse that in the same season wins the Betfair Chase at Haydock Park in November, the Ladbrokes King George VI Chase at Kempton Park on Boxing Day and the Magners Cheltenham Gold Cup in March.

Five-time King George VI winner Kauto Star remains the sole winner of the lucrative bonus after securing the hat-trick in 2006/7. Tizzard has given an upbeat report on the well-being of Lostintranslation ahead of the valuable three mile contest.

“Lostintranslation has come out of Haydock beautifully, he is a big strong horse in the peak of his powers at the moment and I couldn’t be happier with him,” Tizzard said to Kempton Park representatives last week.

“Everyone thought last year, especially Robbie [Power – jockey], that good ground is what he should have, I would be siding on soft or heavy ground because he is a big heavy horse and I need to look after the horse. We will run on whatever Kempton throws up.

“His work at home is nice, we don’t really push him to find out how good he is, he does what we want and he doesn’t turn a hair, his work is lovely. He has just matured into what you dream a young horse would mature into and I think he is nearly there.

“He is straightforward at home. He has now moved into Cue Card’s box which tells a story of where we think he is. He has still got to do it, he still hasn’t won a king George and he still has not won a Gold Cup, it is still all in front of him.”

Tizzard is also likely to be represented by Thistlecrack, who was second last year to Clan Des Obeaux, one of two representatives for champion trainer Paul Nicholls alongside stablemate on pre-race favourite Cyrname.