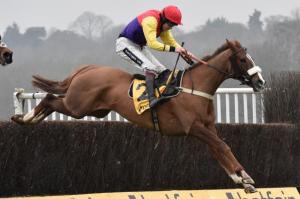 Native River on his way to winning the Betfair Denman Chase in 2018. (Pic: Courtesy of Newbury Racecourse).

NATIVE River targets his third win in the Grade 2 Betfair Denman Chase at Newbury on Saturday where he bids to extend his tremendous course record.

The 2018 Cheltenham Gold Cup winner has won four of his five starts at Newbury. The victories include the sought-after Hennessy Gold Cup Chase in 2016 and Denman Chase in 2017 and again in 2018 at his last start before winning the Gold Cup.

The consistent 10-year-old has won 12 and placed nine times in a career spanning 25 starts that have returned just shy of £1 million in prize money.

Trainer Colin Tizzard’s charge bagged win number 12 in a Grade 2, three miles and one-furlong contest at Aintree in December where he secured a wide margin victory in a boutique field of four runners in his sole start to date in his current campaign.

Native River is set to face a maximum of seven rivals in Saturday’s two miles and seven-and-a-half-furlong contest where he will be ridden for the first time by in-form conditional jockey Jonjo O’Neill Jnr who replaces the injured Richard Johnson.

Native River, who sported blinkers when winning at Aintree in December, is reported to have schooled well this week under O’Neill who has earned high praise from Tizzard.

“Jonjo is going to ride him. He might be a conditional, but he’s a polished young man,” Tizzard told Sky Sports Racing.

“We spoke about it with Garth and Ann[Broom, owners]. That’s what I wanted to do [book O’Neill] – I think he’ll suit Native River down to the ground.

“If Richard doesn’t come back by Cheltenham, we’ve got a ready-made jockey who has had a go on him.

“Jonjo rides for us and schools for us, and we want him on our side.”

Native River is a best-priced 14-1 for the Magners Cheltenham Gold Cup.