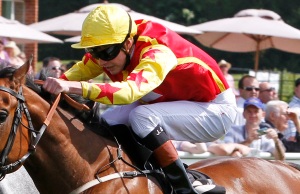 David Lanigan admitted that he is still considering his options with last start winner and Betfred Dante entry Warrior Of Light, who the trainer believes is a potential Derby horse.

The Lambourn handler has yet to confirm where to start the three-year-old campaign with the son of 2002 Derby winner High Chaparral, who impressed with his length victory at Kempton when last seen in November.

There Lanigan’s charge was settled in midfield by Ted Durcan and made good headway to close in on the leaders at the top of the straight and continued the momentum to win with plenty in hand.

The winner had finished sixth on his debut at the same track the previous month and Lanigan admitted that the impressive victory came as no surprise.

“We expected him to win on his second start at Kempton,” Lanigan said of Warrior Of Light who priced at 25-1 (Ladbrokes) for the Investec Derby.

“I did have the idea of putting him away after his first run, but he held on to his coat and looked well so we thought we would get him out again.

“We are treating him as a potential Investec Derby horse. He is training very well at the moment, but we are yet to decide where we will start him off this season.

“There is nothing wrong with him, but we just want to take our time. He will tell us when he’s ready.

“He has strengthened up well over the winter and is a very attractive looking horse.

“On pedigree, he should get mile and a half, but ideally we would like to start him over a mile and a quarter and go from there.”