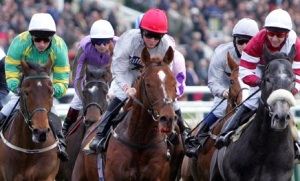 Sandiva booked her place in the QIPCO 1000 Guineas with a half-length victory in the Group 3 Lanwades Stud Nell Gwyn Stakes at Newmarket on Wednesday.

The Richard Fahey-trained daughter of Footstepsinthesand raced in the midfield for the bulk of the seven furlong contest before being asked to quicken by jockey Frankie Dettori and fought well to secure victory.

As a two-year-old Sandiva won three of her first four starts and finished second in the other, in races up to seven furlongs, before finishing seventh at her first attempt at a mile at Longchamp in October.

Yet trainer and jockey believe she will stay the mile distance of the 1000 Guineas on May 4 and has a good chance of victory in the fillies’ classic.

“Where she was drawn was a one or two length disadvantage and there was no cover, so it was a good performance,” Dettori said, on Fahey’s website.

“She is entitled to go for the Guineas with a good chance.”

Fahey added “Frankie is sure she will stay a mile and he spent half the race trying to switch her off and get her in.”